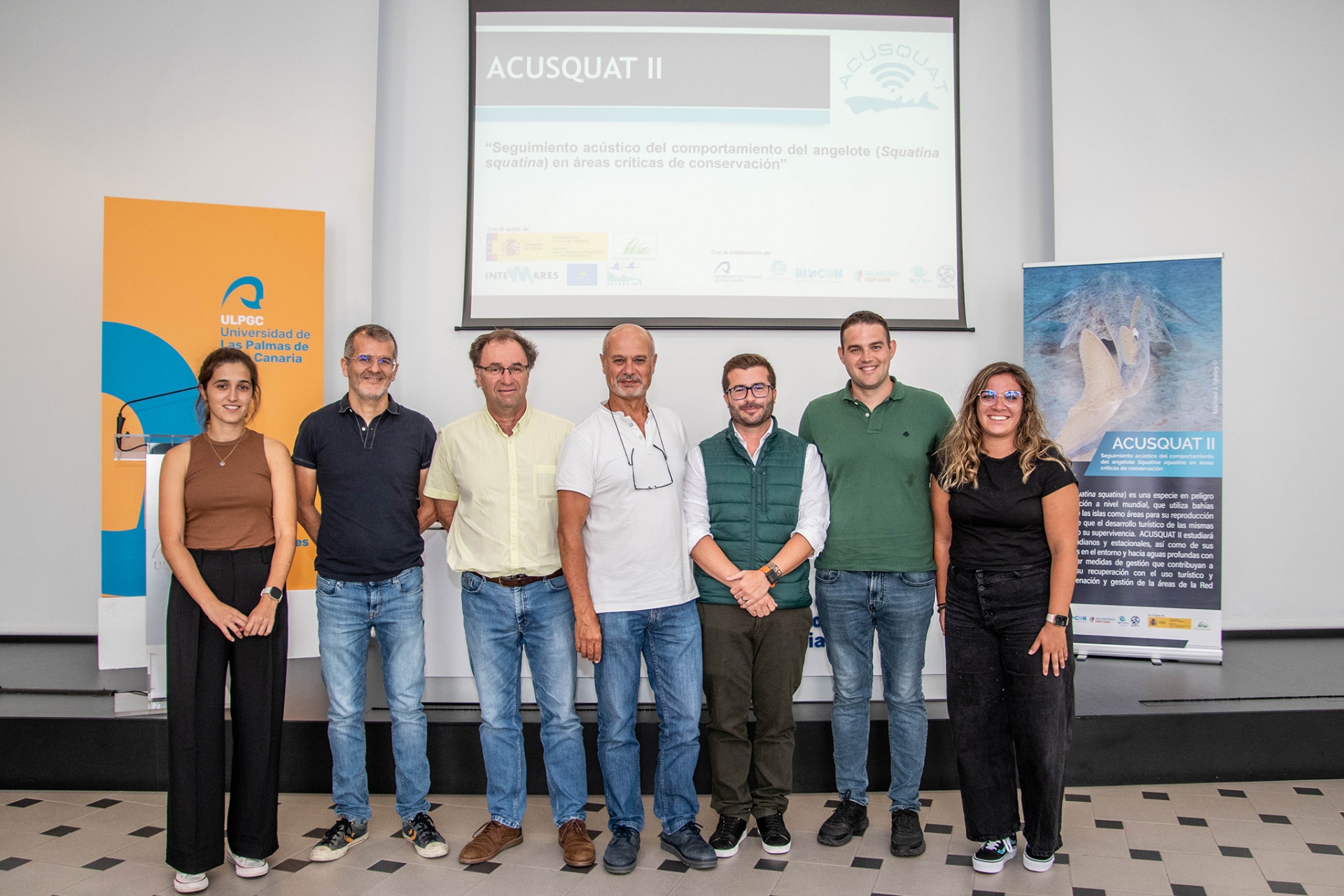 The ACUSQUAT II project lead by ULPGC, analyse the migratory patterns of the angelsharks in the Canary Islands

The research lead by the IU-ECOAQUA, in collaboration with IU-SIANI, has created a coastal monitoring network with acoustic receivers between the Faro de Maspalomas and Amadores beach, supported by an innovative autonomous monitoring vehicle to study the movements of the tagged specimens

The ULPGC  presented the conclusions of the ACUSQUAT II project whose main objective was to determine the seasonal migratory  pattern of the angelsharks in the shallow coastal areas of the Canary Islands in order to promote their conservation.

The angelshark, whose scientific name is Squatina squatina, is a critically endangered benthic shark species, as included in the Red List of the International Union for Conservation of Nature (IUCN). However, the Canary Islands are a refuge for them, and they can be found throughout the coastal area, being considered the only place in the world where "healthy" populations exist.

The ACUSQUAT II project has succeeded in studying, through acoustic marks and autonomous remote monitoring devices, the seasonal migratory pattern of this species between deep areas and coastal ones, which are used for mating and reproduction, as well as nursery for their newborns and juveniles.

José Juan Castro, researcher attached to IU-ECOAQUA, made a detailed presentation of the project and how the angelsharks specimens were tagged, which were not captured, only immobilized for a short period of time on the seabed in order to place the tag, without damaging the animal and thus reducing the stress that the operation could generate on it. Later, their movements near and far from the coast were monitored, thanks to an autonomous surface vehicle that picks up the signals emitted by the acoustic tags and whose operability has been verified in the campaigns carried out since 2020. 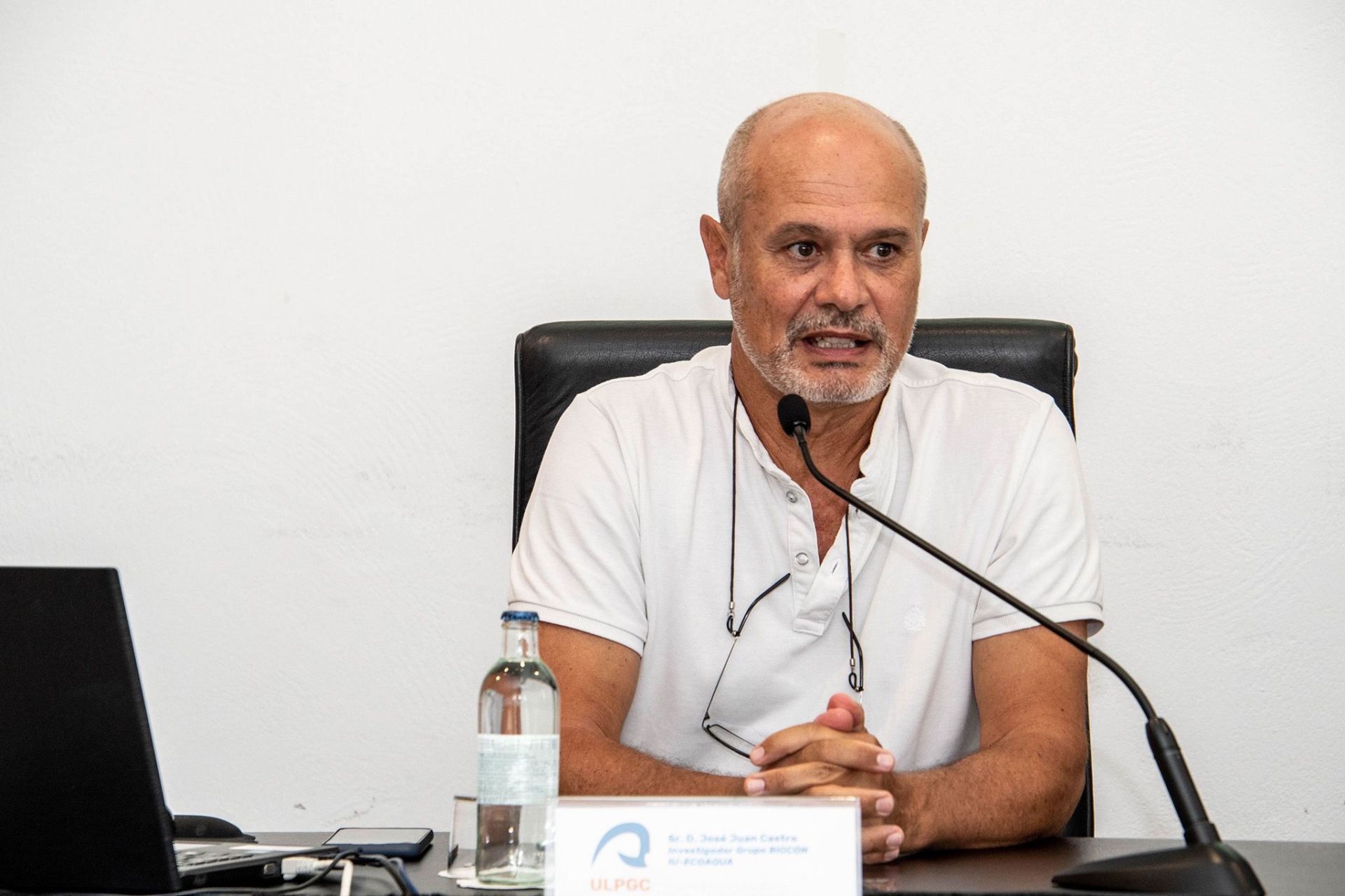 He also highlighted the fact that "this project has incorporated the concept of citizen science, through surveys of divers and other groups related to the sea to collect data on their observations of angelsharks".

Castro explained the results in terms of dissemination of the project, which have resulted in a manual oriented to fishermen, so they know how to correctly release an angelshark accidentally caught on a hook, a flyer with information to distribute in diving clubs and fishermen associations, and informative posters with the characteristics of angelsharks and how to live with them, as he said "angelsharks move in areas with a strong tourist pressure and are even an attraction for visitors who practice marine sports or diving, so they have to know how to share the marine space with them".

For his part, the Director of Research and Technological Development, Aridane González, congratulated the researchers involved in the ACUSQUAT II project, and said that "this project is thoroughly integrated with the line promoted by the ULPGC for interdisciplinary and multidisciplinary research", and noted that "here it is not only about research, but also about conservation, consciousness raising and knowledge transfer to society, within a challenge that the ULPGC leads at international level". González underlined the value of the ACUSQUAT II project "in that it studies in detail the development of the blue economy, combining it with the conservation of species and guiding knowledge to the social reality of the Islands".

The ACUSQUAT II project has been co-funded by the Biodiversity Foundation (Ministry for Ecological Transition and Demographic Challenge) and the University of Las Palmas de Gran Canaria, and is lead by the Biodiversity and Conservation group (BIOCON) of the Institute for Research in Sustainable Aquaculture and Marine Ecosystems (IU-ECOAQUA) of the ULPGC. It has the participation of the University Institute of Intelligent Systems and Numerical Applications in Engineering (SIANI), the Marine Science and Technology Park Foundation of the ULPGC, the Department of Mathematics of the ULPGC, as well as the collaboration of researchers associated with the 'Angel Shark' project.

One of the main achievements of ACUSQUAT II has been to determine that the breeding behaviour of the angelsharks brings it closer to the beaches mainly in the winter months, between November and February, when mating happens, and then it moves to deeper waters. They return to the coast before the beginning of summer, between May and July, for the birth of the young. These juveniles usually remain in these safe areas during their first year of life, in some cases for up to 15 months. The rest of the year (spring and autumn), they remain in deep areas.

The researchers involved in the project implemented a network of acoustic receivers on the south and southwest coast of Gran Canaria (from Faro de Maspalomas to Amadores), where the presence of some of the 25 angelsharks previously tagged in ACUSQUAT I has also been reported.

To support the fixed network of receivers ACUSQUAT II, they developed an autonomous surface vehicle carrying a mobile receiver, created from a recycled paddle surf board. This technology makes it possible to detect the presence of angelsharks in deep waters, beyond the detection area of the fixed receiver network, so as to identify the areas where these sharks concentrate once they leave the coastal areas.