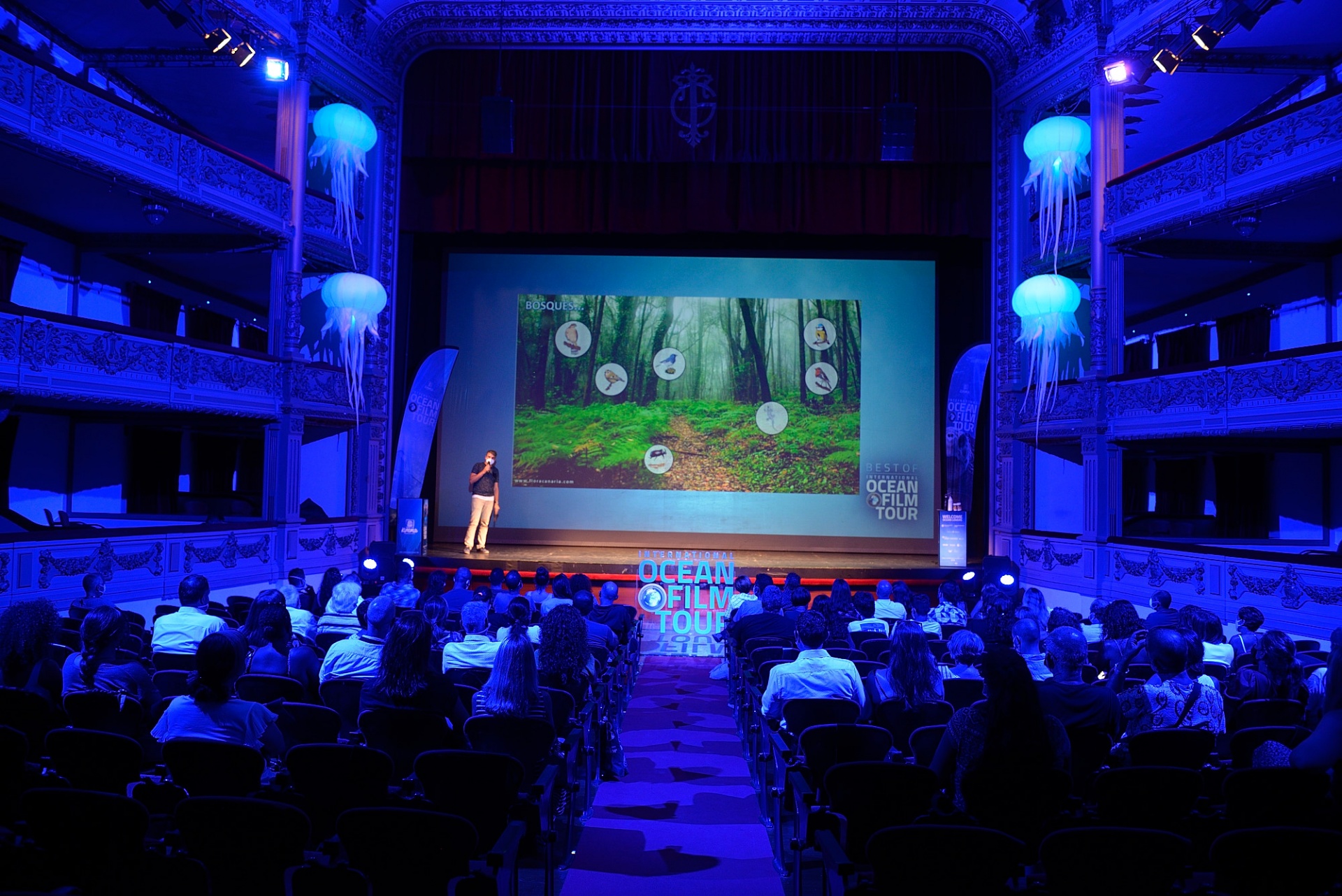 The main researcher of the project, Francisco Otero-Ferrer, associated to the ULPGC’s University Institute ECOAQUA, has been one of the guest speakers at this event, a reference in the cinema on marine and environmental content, held in July at Guiniguada Theater in Las Palmas de Gran Canaria and at Guimerá Theater in Santa Cruz de Tenerife.

The beauty and importance of the underwater black coral forests located in Lanzarote’s municipality of Puerto del Carmen, which have a number of unique features in terms of accessibility, extension and biological richness, have been one of the stars of the International Ocean Film Tour, as it passed through the Guiniguada Theater in the capital of Gran Canaria, on July 2, and at the Guimerá Theater in Santa Cruz de Tenerife, on July 23, thanks to the presentation of Francisco Otero-Ferrer, main investigator of B-CHARMED Project (The Black Coral forests as unexplored Biodiversity Hotspots in the Macaronesian Region: ecosysteM functions and sErvices analyseD").

The research has the collaboration of the University Institute for Research in Sustainable Aquaculture and Marine Ecosystems (IU-ECOAQUA) of the University of Las Palmas de Gran Canaria (ULPGC) and is led by the Atlantic Biodiversity and Sustainability Association (ABAS). It analyzes and studies these centuries-old forests, hidden in the deep waters of Puerto del Carmen.

Otero-Ferrer, doctor in Marine Sciences and main researcher of B-CHARMED, associated to IU-ECOAQUA, gave these lectures in the cinematographic event organized by Kinema Producciones. He made a brief presentation on the importance of these Lanzarote’s underwater black coral forests, as well as the first results of the B-CHARMED project and the different initiatives that are being developed to spread the knowledge of these marine ecosystems among the Canary Islands society.

He also talked about initiatives such as ‘Lanzarote has forests and they are under the sea’, an informative action which involved more than 130 high school students from four institutes of Lanzarote, who discovered last April the spectacular nature of these black coral forests.

During the development of these talks, attendees were able to deepen on the particularities of these marine forests and, more specifically, on the black corals and their habitat. In addition, they learned about the methods used for their study, organisms cohabiting in them, and their importance within the marine ecosystem and their main threats.

B-CHARMED chose these underwater forests as a model area to develop tools to map them and deepen the knowledge of their biodiversity. It is part of the LIFE4BEST program, providing funding (grants) for actions focused on biodiversity conservation and sustainable development in all the Outermost Regions of the European Union (ORs).

The project is led by ABAS (Spain), an NGO that partners with Leibniz Institute for Baltic Sea Research in Warnemünde (IOW), Germany, with the Laboratory of Ecogeochemistry of Benthic Environments, Banyuls sur Mer (LECOB), France, among others. In addition, for its development at local level, it counts with the collaboration of researchers from ULPGC’s IU-ECOAQUA.

About the International Ocean Film Tour

The International Ocean Film Tour, held in the Canary Islands in July in a reduced 'Best Of' version, due to COVID-19, is considered one of the best cinematographic events for sea lovers. It programs great oceanic adventures and documentaries about the environment.

In addition Otero-Ferrer’s interesting presentation, those attending the event were able to enjoy a selection of the best documentaries in its program such as 'Sonic Sea' (Daniel Hinerfeld, United States, 2015), a plea to protect life in the oceans from the destructive effects of ocean noise pollution where whales are not the most ruthless species in the waters, it is humans with their marine vessels, sonic testing and military maneuvers that "disrupt all forms of life in the ocean," leading to mass strandings of whales and other marine species.

'The Weekend Sailor' (Bernardo Arsuaga Mexico, 2016) was another highlight of the festival. A 75 minutes documentary that recalls the first 'Whitbread Round the World Yacht Race', held in 1973. Seventeen yachts from seven nations and 27,000 miles at sea set off from the British port of Portsmouth with a surprise boat: Ramón Carlín’s "Weekend Sailor", who took part in the race with a crew of friends and family with very little sailing experience and who, despite this, at the age of 50, ends up becoming a more than worthy contender in the competition.